We are a participant in the Amazon Services LLC Associates Program, an affiliate advertising program designed to provide a means for us to earn fees by linking to Amazon.com and affiliated sites, at no extra cost to you.

what is celery root (celeriac)?

Celeriac, also known as celery root is the root of the celery plant. A nutritious vegetable that is seeing less and less usage in today's kitchen, it was used in ancient times as a vegetable as well as for seasoning purposes. The Romans treasured it as a great anti-depressant. Its popularity declined in the middle ages before it made its reappearance in Italy during the 17th century.

It is mostly consumed in Europe where it is also mostly cultivated. Also, it is cultivated all year round and gets particularly cheap during the fall and wintertime (somewhere between September and March). The roots tend to vary in size ranging from that of a pear to the size of a honeydew melon.

This segment explains the best ingredients for making celeriac chips and possible options for substitution. For measurements, see the recipe card provided at the bottom of this page.

how to peel celeriac

Peeling and cutting celery root is actually easier than you may think. I know, this knobby root can look intimidating but trust me, it is very simple.

Peeling: first, start by cutting off each end so you end up with a flat base, which makes it easier to work and prevents it from slipping during peeling. It also makes the cutting process easier.

Next, lay the celeriac on a clean chopping board. Using a chef's knife, start from the top and peel it lengthwise. Alternatively, you can cut it into halves, cut again so you end up with quarters, then proceed on to peel.

Cutting: to cut into chips or fries, first slice the celery root into quarters and then slice these into smaller slices each about ¼ to ⅜ inches in size (0.64 - 0.95 cm) thick. If you prefer shorter fries or chips, slice again cross-sectionally in the middle. You can also cut into other types of cuts such as cubes, and use them in other recipes.

how to make celeriac chips

This section gives a summarized step by step breakdown of how to make Moroccan Zaalouk. A detailed recipe card has been provide at the bottom of this page.

Serve these celeriac fries with some homemade No-tomato Guacamole, Oven-baked Chicken Drumsticks, Filled Omelette, Ketchup, and Barbecue sauce. Seeing that this recipe is low-carb, you can also pair them up with your favorite sugar-free and keto-friendly sauces.

It has a taste that tends towards that of parsley mixed with celery, and, bears a very strong aroma. Late harvested celery roots have a stronger aroma than those harvested earlier. I absolutely recommend using spices and herbs to enhance the taste and flavor, when cooking or baking.

You will normally find celeriac or celery root at your local farmers' market. Most supermarkets will also have it, especially during the colder months of fall (autumn) and winter. Alternatively, you could search online for local suppliers near you.

Uses of celery root in the kitchen

Celeriac has several uses in today's kitchen. You can make mash from it just as you would with mashed potatoes, make fries or chips, hash-browns, make remoulade using it, soups or gratins. It can also be distilled to produce essential oils from which liquors can be made. Grate and eat raw as a salad.

Does celeriac turn brown after cutting?

Celeriac does turn brown once cut hence it is important to store it properly (see how above). Some people also prefer to store the cut celeriac in a bowl of water with a squeeze of lemon juice in it. The bowl is then covered with plastic wrap or an airtight lid. You may, however, lose a few vitamins storing it like this.

Great news, you have made it this far which means you probably made or are making this baked celeriac chips (fries) recipe! It would go a long way if you could leave a ⭐rating on the recipe card or comment in the comments section below. 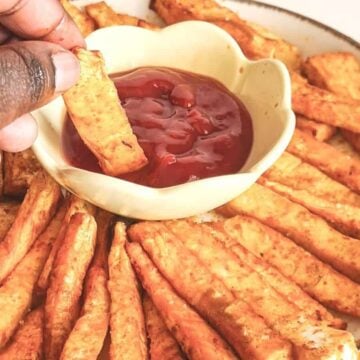 Medium-sized mixing bowl - to combine the ingredients.
Chef’s knife or vegetable peeler - for peeling and slicing the celery root.
Chopping board

Calories: 66kcalCarbohydrates: 1gProtein: 1gFat: 7gSaturated Fat: 1gPolyunsaturated Fat: 1gMonounsaturated Fat: 5gSodium: 586mgPotassium: 29mgFiber: 1gSugar: 1gVitamin A: 369IUVitamin C: 1mgCalcium: 4mgIron: 1mg
Tried this recipe? I would love it if you could leave a rating by clicking on the stars above on this recipe card.or simply PIN on Pinterest for later!!

Hi, I'm Kate! I am here to show you how easy it is to recreate African dishes at home, as well as other simple recipes from around the world.

Read more about me →