Delicious, quick to make, and fresh Salad Shirazi that you absolutely want to try! This simple Persian recipe uses just a few ingredients and is the perfect appetizer or side dish!

We are a participant in the Amazon Services LLC Associates Program, an affiliate advertising program designed to provide a means for us to earn fees by linking to Amazon.com and affiliated sites, at no extra cost to you.

what is Salad Shirazi?

Salad Shirazi is a simple Persian salad recipe comprising tomatoes, onion, and cucumbers dressed in lime juice and olive oil dressing. It is so popular in Iran that it is considered the national salad of the country. It has its origin in Shiraz, in the South of Iran (hence the name).

It is also very similar to the Israeli salad (also known as salat yerakot yisra'eli). This also comprises finely chopped tomatoes, onion, and cucumber and was adopted by Jewish immigrants to the Levant in the 19th century. Most versions of the Israeli salad include chili and bell peppers. It is normally dressed with lemon juice, yogurt, or Za'atar. The Israeli and Shirazi salads are basically a variation of each other and only differ with the addition of a few extra vegetables such as bell and chili peppers.

This salad, which is also known as salat e shiraz or simply Shirazi salad, uses just a few healthy ingredients and is absolutely easy to prepare. It is exactly for this reason, that I love making it for busy weeknight dinners or serving it as a refreshing side dish, during summer. I also love how tasty the dressing is, you just can't beat this!

Here are the ingredients you will need:

Additionally, you will need the following ingredients to make the salad dressing:

This is a summary of how how to make salad Shirazi, see the recipe card below for detailed instructions.

Don't just stop here though. Feel free to play around with the ingredients in your pantry. Some of my favorite variations include:

Great news, you have made it this far which means you probably made or are making this recipe! It would go a long way if you could leave a ⭐rating on the recipe card or comment in the comments section below. 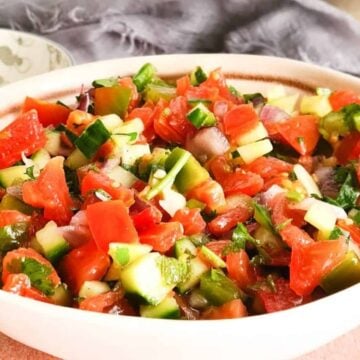 Mixing bowls (a large one to combine the salad shirazi ingredients, and a small one for the dressing)
A whisk
Mixing spoon

Variations:- Don't just stop here though. Feel free to play around with the ingredients in your pantry. Popular variations include:

Calories: 99kcalCarbohydrates: 8gProtein: 1gFat: 7gSaturated Fat: 1gPolyunsaturated Fat: 1gMonounsaturated Fat: 5gSodium: 150mgPotassium: 231mgFiber: 2gSugar: 3gVitamin A: 441IUVitamin C: 14mgCalcium: 24mgIron: 1mg
Tried this recipe? I would love it if you could leave a rating by clicking on the stars above on this recipe card.or simply PIN on Pinterest for later!!

What is the difference between Salad Shirazi and Tabouleh?

This site uses Akismet to reduce spam. Learn how your comment data is processed.

Hi, I'm Kate! I am here to show you how easy it is to recreate African dishes at home, as well as other simple recipes from around the world.

Read more about me →